I was working with an old Windows 2008 R2 server last night. It needed a “few” updates!
So I will first admit to several of my own mistakes. I did not give myself time to update this machine regularly enough in the past and of course we always have to install the Windows Updates on time. If you figure you wait for an extra month for any fixes introduced one month to be fixed the next its something we all understand. But this was many months worth of updates. I went the lazy way, which bit me as you will see below.
I was first interested on getting 1 specific update on the machine. So I selected that update and a random few other smaller updates. Now this is a mistake! It installed the updates and wanted a reboot. OK. Next thing which happens is that the machine starts up in an immediate Blue Screen with code STOP 0x00000050 PAGE_FAULT_IN_NONPAGED_AREA or in short a code 0x50. There was no way around this into for instance safe mode or whatever. The only thing which popped up was the System Recovery Options shown below: 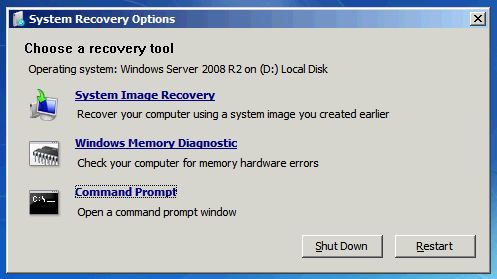 By the way, before you get to this screen it asks you for the Local Administrator password. Turns out even I did not remember, but I got it in the end. Managing admin accounts, including local administrator accounts is important to do. Watch Paula JanuszKiewicz give you an example why it is important here at one of the CQURE academy sessions about passing the hash.
Felt a little panic coming up at that point, because data loss or at least a lot of time fixing things can follow this action. Did not look like I could do much from here either. I did have backups of the data, so in time I would have restored it.
Another rerason for the panic is that I was doing two systems at the same time and in the same way…. and you guessed it… both with the same result!
A lot of googling open and there are a lot of videos explaining how to fix this FROM Windows! Problem is I am stuck in this System Recovery Options Screen. The memory check did not show anything by the way.
Well somewhere hidden in a comment of one of the threads (I can not find it!) was the suggestion that some previous hotfix might have hit one file and removing that file solved it for a few people.
In the picture above you can see a command prompt. Open that.
Next you need to find out which drive letter contains your Windows Installation. The System Recovery just uses a drive letter for itself and throws the other drives into other drive letters. So I did a C: Enter. DIR and knew this was not the drive. So I went to D: and did DIR again. Nope.. Continued until I got it.
CD Windowssystem32
Dir *cache*
The file I am looking for is fntcache.dat
this is the font cache file. Do NOT touch the DLL file there. The DAT file is a cache and will be re-built by Windows after restart.
del fntcache.dat
Now I exited the command prompt and restarted the server. It started again into Windows where I hoped it would go.
Next I still needed to do a select-all on the rest of the updates and install them all the same B):D
So keep in mind to update regularly + do not select half the updates but go for them all because there are fixes in there which fix issues created (or surfaced) by other fixes.
Now I can continue with actually replacing these servers, which was the plan to start with!
Good luck!
Bob Cornelissen