I have seen this one in the forums as well once and have had this happen to myself a few weeks ago, but forgot to post about it as I would get back to the topic later. So now is the time.
What is the situation?
I was creating SCOM reports from the SCOM Reporting pane in a development environment. These were simple reports based on the generic reports included. Because I had to move the reports to two other environments later I decided to use the option to save the report in a Management Pack right from the console. I used a separate clean management pack for this, so we can update and upgrade this MP easily. Works great! Until I moved it into another environment and tried to run the report and found out it did not want to run. What happens is that the report does not want to run because some fields have not been defined (like aggregation for hourly of daily in this case), but those fields are greyed out! So there is no way to change those fields in the console.
What does the error look like? 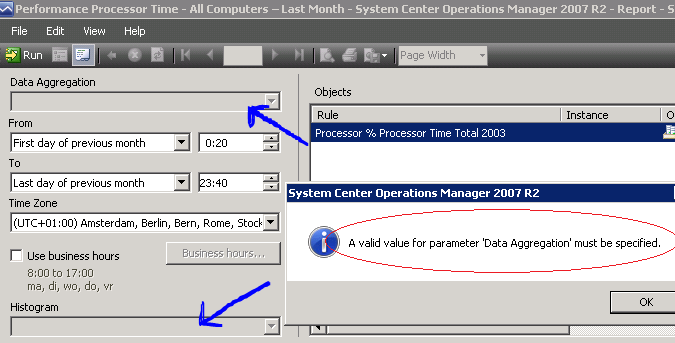 We can see that certain fields are grey in the report parameters and that it blocks you from continuing to run the report. You see the two grey areas pointed out in the picture by blue arrows?
The error we get when trying the Run button is:
A valid value for parameter ‘Data Aggregation’ must be specified.
Where did this come from?
It was time to investigate. As at first I used a dedicated management pack and had one report in it, it was best to open the XML itself and check what was there.
Soon I saw there is a reference to the management group there. This reference will not work in another environment! The reference to the group I was targeting against did not seem as a problem, because I assumed (as a prerequisite) that those groups would exist in the other management group as well. This is because I used groups that come from sealed mp’s from Microsoft (like All Windows Computers and such groups).
Alright so in the XML I see the report and there are a few parameters included there. One of those was the following:

Solution:
In this case it was as easy as removing this specific parameter from the XML and loading it into SCOM again.
Once this was done and refreshing the reporting pane in SCOM after a few minutes the report when opened just ran without input (those two fields that were greyed out were actually already defined, but didn’t get picked up due to the problem with the reference to the ManagementGroupId.
If you ever run into this, just check the XML to see if there is anything specific blocking your run. The reference to the management group ID was the most likely cause and turned out to be the one that caused the issue.
Good Luck!
Bob Cornelissen